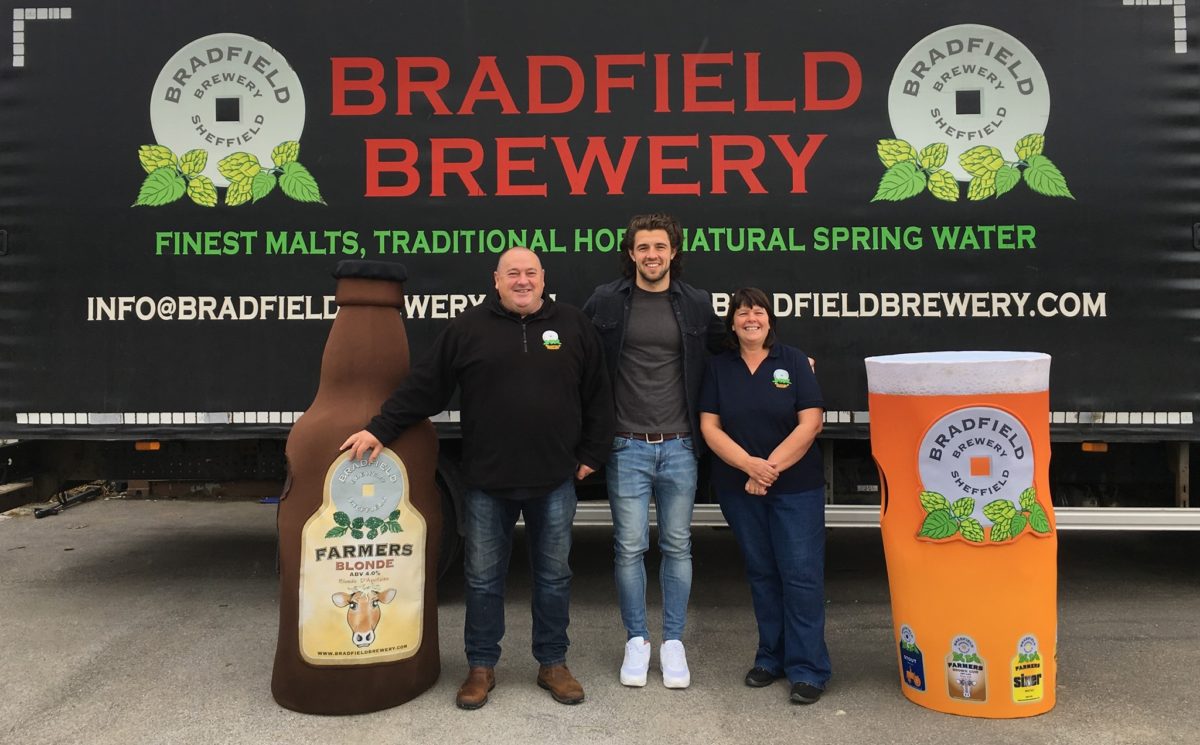 Bradfield Brewery are proud to be once again sponsoring the Sheffield Steeldogs for the 2019-2020 season.

Roger Williams provided the below article on confirming the continued support.

Everyone at the club is very happy that we go in to the 2019/20 season once again as the Bradfield Brewery Sheffield Steeldogs.
Our partnership with Bradfield Brewery goes back over many years and this will be the seventh season they have been our title sponsor.
Based at Watt House Farm in Lower Bradfield, Bradfield Brewery have been making award winning beers since 2005. The business has grown since then, with their beers now available at pubs across South Yorkshire and beyond. The shop at the brewery offers the full range of ales and for those wanting to enjoy a fine pint in a relaxed environment there is The Nag’s Head in Loxley and the King & Miller in Deepcar – lots of opportunities to enjoy the best beer in Sheffield.
Steeldogs coach Ben Morgan is clear on the bond between the club and the brewery;
“The Bradfield Brewery has become synonymous with the Sheffield Steeldogs. It’s fantastic welcoming John, Sue and the whole Bradfield Brewery family back onboard – they have been loyal to us for years. The players are very respectful of the everything they have done for us over the years and they feel privileged and proud having the name on the front of the jersey. We are a local team, we pride ourselves on local players and to have a local company ties in with everything we are all about.”
John Gill, owner of the Bradfield Brewery, likes the connection between the brewery and the team;
“I enjoy being a part of the Steeldogs family because you see passion out there in the ice, plenty of local lads going out there to play for that badge on the front of the jerseys. We just want to get behind this team and see where the season takes us. We want to watch those quality games each weekend and promote the Steeldogs alongside our brand and of course get both names out there.
“We really like the direction of the club since Ben has been in a coaching capacity – there is more energy within the club. Last season really made us enjoy our Steeldogs hockey experiences and the prospect of the new league structure is exciting. We will be seeing far more competitive games and seeing the team test themselves against the best week in, week out. It would be good to see even more new supporters come and follow the team – we saw several new faces last season who began to come back time and time again.”
Steeldogs co-owner Roger Williams welcomes the continued connection;
“John and Sue really love their hockey and it’s great to have title sponsors who are such fans too. The brewery is such a success story and over the past couple of years that has rubbed off on the team and hopefully we can share more of that this year. We are thrilled to have them onboard for another season as they do feel like a part of the club, a real part of the Steeldogs family. Having them along as we celebrate our tenth season is very fitting and we thank Bradfield Brewery for their continued support of the club.”